Grenada wanted to increase the number of UK visitors to the Caribbean island in the 20-40 age group.
Alongside British Airways a joint promotion was prepared to offer reduced flights to Grenada, and required a creative campaign to engage the target audience effectively.

As savvy consumers, the key challenge was to engage the target audience in the 20-40 year old bracket in a new and exciting way, to entice them to book a holiday to Grenada. Identifying the most effective location to host the campaign would be crucial to deliver the largest amount of traffic to the dedicated British Airways landing page.

We suggested utilising the popular Stylist magazine to promote the campaign to the target audience. A freely distributed magazine across London, Stylist targets affluent, well-travelled 20-40 year old commuters and so proved to be the ideal platform for promoting the campaign.

Instead of taking a traditional print advertorial, we chose to create an augmented reality video advert to truly convey the beauty of Grenada.

Adhering to British Airways’ strict brand guidelines, we created a full-page advert that advised the reader to access the unique interactive content by downloading the free Aurasma Viewer app.
An augmented reality platform, Aurasma, has been used extensively in Stylist magazine meaning a large percentage of its 500,000 readership would already have the app on their smartphone.

Using the app to view the advert made the page come alive on the screen, with a tide washing in over the beach and enticing footage of the island.

The content included details on places to stay, mini guides to dining out, and things to do when visiting Grenada. At any point during the video, the user could tap on their screen to be taken to the British Airways landing page and book reduced flights to the island. 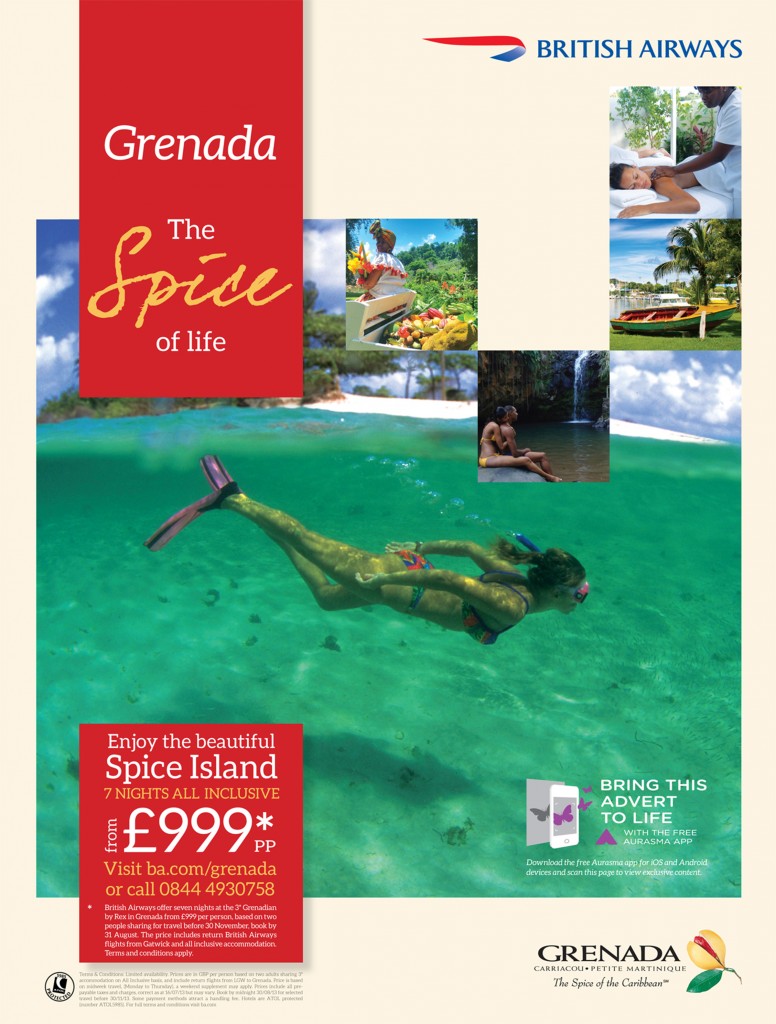 We’re delighted to break new ground with this campaign. Plus Two introduced us to Aurasma and created the perfect advert to ensure that Stylist readers get to see the best of the Spice Isle.

The campaign was the first time augmented reality had been used for a tourism campaign in the UK.
The promotion received huge PR interest and the results exceeded the targets set by Grenada Tourism and BA.