So far, 2015 has seen quite a lot of movement in the web CMS (content management systems) world, compared to the recent years. Let’s have a look at the current usage statistics and some of the latest news.

The iron giant (or the elephant in the room for many) WordPress is still the most used CMS around.
Yes, it’s not flawless for sure, but I think there are still some very good reasons behind its popularity. Firstly its ease of use and flexibility (at least from a developer perspective), and secondly because of its great community (there are thousands of docs and tutorials you can find on the web). Maybe you expected me to say “because of its hundred of plugins”, but even if that is true, I still believe that too many unnecessary plugins is exactly what can make a WordPress website a fragile and clunky one.

The WordPress team has done a remarkable job in keeping their CMS updated with new interesting features with each release. Additionally, the admin area feels a bit more user friendly and powerful with each release.

There is still a common misconception that all of WordPress websites are “just blogs”, as WordPress was initially launched as a blogging platform (more than 30% of WordPress websites don’t even have a blog, actually). Ultimately, at least for websites, 90% of the end result is in the hands of the website developers themselves. A lazy developer, for example, will just use custom fields or even put html code in the content editor (making content managers’ life miserable). A good developer instead will try to make the user experience as smooth as possible even within the admin area. Most importantly, a proactive developer will try to prevent errors in the content insertion that could compromise the website.

In my opinion, WordPress ironically often fails in what it should do best: inserting content into blogs posts. It still feels a bit outdated in this department, and with not enough tools to manage complex layouts. There are many interesting plugins or themes that could improve this (Layers is still the best one probably), but a ‘native’ solution would be much better.

Born from the idea of John O’Nolan (former deputy head of the WordPress UX team) the CMS Ghost became a reality in 2013, after a successful Kickstarter campaign.
O’Nolan’s thoughts were that WordPress, to increase its flexibility, was losing part of its original goal of being a lightweight blogging platform. So the idea was to create a platform just for blogging; an elegant and simple solution focused mainly on publishing.

So, now that Ghost has finally reached a level of maturity high enough to be taken into serious consideration for your next project (and not only as a fancy experiment), let’s have a quick look at which are the basic differences between Ghost and WordPress. 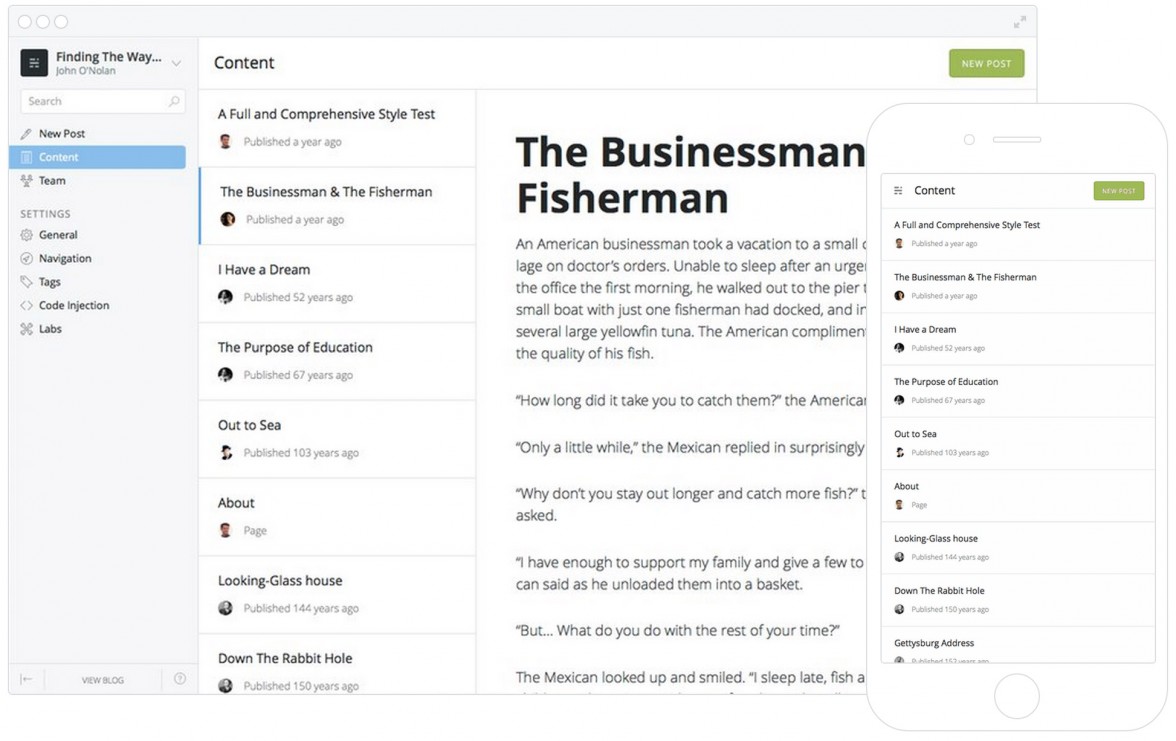 Without going into too much detail of all the other different features, I think that what Ghost has done already for sure is to raise the bar of what users expect from the publishing tools of a CMS, creating a new generation of user interfaces.

The UI/UX for Ghost is beautifully made, and WordPress now has some catching up to do (and we have already seen some effects of this with the latest WordPress releases).

I would be really keen to use Ghost in a client project, but it would need to be a website which prominently features a blog and does not need much flexibility in the other compartments. Ghost feels like something new and fresh but there is still room for improvements.

Of course web CMS’ like Drupal and Joomla are still around, and if you are a developer with a lot of experience in any of the two you still want to make good use of it. And you also know that each of them have a lot of good features (and probably even less limits than WordPress for example).

After all a CMS is a tool (or probably the blueprint for a huge tool), and it is as good as the developer using it, which should know its strengths and flaws.

Drupal and Joomla appear to be losing ground (or market share), and feel like something from the past somehow. Both have updates looming (Drupal 8 and Joomla 3), so watch this space.

On a side note, it’s also true that, for example, a CMS like Drupal would be better for larger scale websites/projects, but at the same time, unless you are already proficient with it, it would take you less time to develop a custom solution than to learn Drupal from scratch… and often a custom solution is what bigger projects end up choosing.

A new generation of users interfaces are being developed (Ghost being one of the best examples of this), and many of the newer versions of popular CMS, like Magento 2 (currently in beta) for example, are already showing a lot of improvement in that specific area.

Another area of development which is being taken more seriously now is security (SSL anyone?!). 2014 has seen a lot of attacks on many WordPress plugins and Drupal itself.

PHP 7 is also scheduled for release in October, with a lot of improvements, so let’s see what this will change for our beloved CMS.